Interspersed throughout the Whites are campsites and shelters that cost $8 a night. It can get kind of tricky to get through the Whites without paying money for lodging. I am pretty much a cheap skate so I was trying to do this as cheaply as possible. This proved to be more difficult than I was expecting.

As a thru-hiker you have several options – you can stealth camp somewhere below tree line, or do a work for stay. A lot of the whites is above tree line so finding a stealth site can be hard. And I was hiking with 3 other people, and none of them would fit us all. You don’t want to have to hike another mile to get below tree line and find a place to sleep. 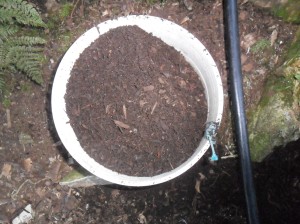 I filled 5 buckets and spread it out

So, there were a couple times that I did work for stay. The first was at Garfield Campsite. We arrived around 6pm and I talked to the caretaker about work for stay. He said he had some and it would take about 15-20 minutes. Awesome. So, instead of paying 8 dollars I spread humus. For those of you that don’t get my drift, I basically spread poop from the privy around. It was all sanitized by then and I did wear gloves, although they didn’t help a whole lot.

The caretaker every so often will take the contents of the 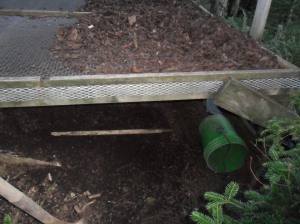 screen to sift the humus

privy and add bark to it. Then they let it heat up and kill any bad stuff. After that they sift it and the bark that has absorbed all the moisture stays above the screen to be reused. Then the humus is spread over the mountainside. This is the part that I did. It wasn’t too bad and I was dubbed the sanitation expert after that. It didn’t even smell bad, so that was good. 🙂 It’s quite an interesting cycle. I wouldn’t want to do it all the time, but hey…I saved $8!

I enjoy adventures. Whether running marathons, thru-hiking the Appalachian Trail, working with Service Adventure, or working with youth as Program Director of Swan Lake Christian Camp for 9 years, I have encountered many an adventure. On this site I will try to capture the big and small ones for you. Enjoy!
View all posts by Renee »

Posted on September 2, 2012, in Uncategorized. Bookmark the permalink. Leave a comment.